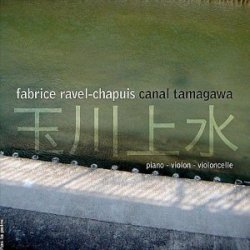 French novelist Philippe Adam’s 2004 novel Canal Tamagawa is a story that recounts the last days of Japanese writer Osamu Dazai, who after a series of previous attempts, committed suicide in 1948, drowning after throwing himself into Tokyo’s rain-swollen Tamagawa canal. At the time of the book’s release a CD that featured a musical version of the book was included. The work consisted of poetry, the spoken word and music composed by French minimalist composer Fabrice Ravel-Chapuis. Written for violin, cello and piano Ravel-Chapuis’ music was released as a stand-alone album in 2011.

Ravel-Chapuis’ score for Canal Tamagawa reminds me very much of Pierre Oser’s score for the silent film, Die Leuchte Asiens, which I reviewed recently. In Oser’s score (as seems to be the case with a lot of music written for silent films), the music is used as musical a backdrop rather than replicating the on-screen action. The same is true for Canal Tamagawa. Ravel-Chapuis’ contemporary minimalism style is ideal as a support for the aspects of the novel that have been chosen as inspiration for the score. I think that writer Osamu Dazai’s troubled life – with its hardship and the author’s numerous suicide attempts – also lends itself to the minimalist form of music: somehow minimalism ably translates into music the (perhaps) unstable mind. Using a small trio chamber ensemble the composer here forgoes the idea of the thematic and, instead, focuses on varying pace, textures and mood to hint more at the psychological aspects contained within the story.

Ostinato is the overriding device used throughout the score but by varying the emphasis of the instrumentation driving the various ostinato patterns or by changing their tempo, the composer succeeds in keeping the sound interesting. For example, the piano plays a quick-paced ostinato in “Tenter d’Avancer” that is the driver of the track as a whole and by varying the strength of the playing (Ravel-Chapuis himself is the pianist) this introduces a changing dynamic to the ostinato without actually changing the rhythm’s pacing. And a Philip Glass-like solo piano rhythm in “En Retard” is used as the structure around which swirling strings revolve. The cello becomes the driving force in “Ainsi de Suite”, controlling the rest of the ensemble’s participation in the piece. And track 7, “Pieuvres”, has all three instruments participating in the ostinato patterns which makes for quite a complicated-sounding composition.

The use of ostinato patterns is not uniform throughout the whole score. The first couple of tracks (“Ouverture” and “Aux Lendemains”) begin the album in a particularly sombre way, with low register strings playing long notes and piano (which, admittedly, does play a repeating motif) traces out lines that tend to descend the musical scale. A slow-tempo figure (as heard in “Va-t’en”) does feature a prominent ostinato but the pace of it does suggest a mournful and sombre tone to the track. This makes the appearance of forceful and frenzied piano chords in “Va-t’en” all the more shocking. As with these initial tracks, there are passages in amongst the ostinato patterns of the other tracks that do hint at something more melodic. Although these passages are melodic they rarely lighten the feel of the score. In fact, the melodic violin heard in “Ainsi de Suite” reminds me somewhat of Bernard Herrmann’s use of the viola d’amore in The Night Digger. Interestingly, two of the slower-paced tracks (“Perdu” and “Lentement”) do not appear to feature violin at all, and the piano and cello combination of “Perdu” gives a decidedly film noir-ish feel to the score. Track 9 (“Lentement”) signals a return to the more morose and sombre mood first heard at the start of the album. This dark finish to the score, together with some dissonant piano chords (“Tomber”) and sickeningly high-register strings (“Gomen Nasai”), rounds off an album that’s a challenging but rewarding listen.

It’s difficult to gauge how successful a score for a written text is at translating the moods and ideas that are set out in the written word. But, after listening to Ravel-Chapuis’ score for Canal Tamagawa, I am left with a sense that Osamu Dazai’s life was not a particularly happy one. And generating this response in the listener may be the best measure of success there is for a composer. Those who are turned off by the minimalist scores of Michael Nyman and Philip Glass should not immediately dismiss Canal Tamagawa. This is a score that delivers a surprising amount of variety and isn’t as depressing as my review may have made it sound. Ravel-Chapuis’ score is available at the usual digital online stores including iTunes and Amazon.