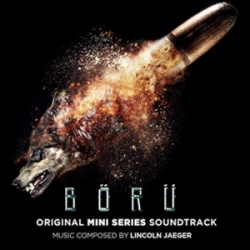 Börü (Wolf) is a Turkish Netflix Original 6-part series (not to be confused with the movie of the same name) that aired in 2018. The show follows a group of military Special Ops types – the Wolf team – from 2014 through to just prior to the 2016 attempted coup in Turkey, Each episode focuses on a specific operation although there is an over-arching story across all 6 episodes and the obligatory personal stories also to tell. Critics have noted the well executed action sequences – of which there are many – but the show is let down by the quality of the stories, the script and the characterisation of members of the Wolf team.

Börü’s score is by UK composer Lincoln Jaeger, whose previous credits to date are mainly trailer music (though he has also scored the feature film version of Börü). A quick read of the composer’s website and you will find that the composer “…love[s] grand orchestral sounds, hybrid trailer music, great drum grooves…”, and that’s exactly what you get with Börü. Jaeger has focused largely on the action and composed a series of adrenaline-fueled cues which is exemplified by the album’s opening track, “Börü Theme”. Bold, rasping brass plays a gladiatorial fanfare before we hear the theme in heroic strings and brass. Underpinning this are muscular percussion rhythms. The theme features in various forms throughout the score and is effectively adapted for slower, more reflective moments (“Börü Theme (Sad Version)”). Percussion and strings (which also have a staccato, percussive edge to them) are a common feature of the score. And they are usually played at a frenzied pace (e.g., “Explosion Up On High”, “Day Is Won”, “Dark Alleys”). It’s all very generic, but it’s done well and is constantly varying which sustains the interest.

The soundtrack isn’t just action music. Being a Turkish drama, there’s an element of ethnic instrumentation (e.g., strings in “Börü Theme Bad Ass”). There are some quieter, more emotionally-charged tracks which feature solo strings, ethereal choral elements and reflective piano (“Lament For Wolves”) and tracks for sneaking around (“Seek and Destroy”). Another interesting aspect of Jaeger’s music is how he links the military maneuvers of modern-day soldiers with Turkey’s patriotic past. “Plevne March Redux” and “Izmir March Redux” feature marches familiar to most Turks and are based upon songs to commemorate victories during the Russo-Turkish War and Turkey’s was of independence, respectively. The composer gives these old tunes a modern twist with forceful percussion and bold brass.

Börü is an entertaining score with many tracks that I have revisited since I first came across the album. Most of the tracks feel like self-contained statements of musical ideas rather than programmatic music following on-screen action. And, that’s because the music was not written to picture – because of time constraints. Although some of the tracks have a natural flow from start to finish, there are some other tracks that feel more ‘modular’; that is, they feel as though tracks have distinct parts to them that make them easy to edit and drop into the story at the appropriate moment. For example, “Plevne March Redux” opens with a tentative expression of the theme on piano before there’s then a more forceful statement of the full theme and this makes it east for the editor to choose the appropriate place to use either version. This doesn’t really detract from the listening experience or the quality of the music (Howard Shore’s excellent Looking For Richard is one example I can recall where the music was not written to picture). Overall, Börü has a catchy main theme, the action music is very enjoyable, and it’s a great way to spend 40 minutes.

The album can be purchased at online stores as a digital download or to stream.