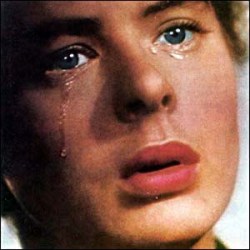 I first came across Young’s Oscar-nominated score for For Whom The Bell Tolls as an 8-minute suite which was featured on the excellent Koch International Classics CD, “Shane: A Tribute To Victor Young” (New Zealand Symphony Orchestra, conducted by Richard Kaufman). Listening to almost an hour of the original score highlights the quality of Young’s score.

Drawing from a number of influences, For Whom The Bell Tolls also covers a number of different emotions delivering a varied listen. Dramatic from the outset, the setting of the film during the Spanish Civil War means that there’s a significant presence of acoustic Spanish guitar and Young expertly blends this strong musical colour with orchestra. And tracks such as “Politics In The Cave” add a bit of solemnity which also adds variety.

The Canadian record label Disques Cinémusique premiered a suite of seven tracks taken from the original soundtrack on a CD also featuring cues taken from Golden Earrings and Omar Khayyam. But there have been several digital-only releases that features a significant portion of the score. Sound quality on all releases of the original soundtrack recording suffers from a significant amount of ambient noise (the CD release is taken from a vinyl source) but this doesn’t take anything away from the quality of Young’s music.