In the run-up to attending a live playing to picture of Psycho in a few weeks, and to continue celebrating 100 years since the birth of Bernard Herrmann, here’s another selection of ten tracks:

A short 35-second snippet from the suite that can be found on the Film Music Society’s Music From CBS Westerns CD, this is pure Herrmann: a short, repeating descending motif that’s thrown around the various sections of the orchestra. And that’s it! 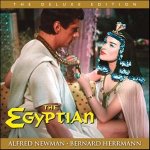 Herrmann’s contribution to this collaboration with Alfred Newman gives the score such poignant music, full of sadness. I may have mentioned before that I much prefer Herrmann’s more psychological aspect to the score to Newman’s parts. The meandering flute line towards the end is so hypnotic.

An example of Herrmann’s library music that is featured on Prometheus’ The CBS Years: Volume 1: The Westerns. Yes, Herrmann suggests tranquility but it’s not a particularly happy landscape. It’s a landscape that is desolate from the low register instruments he used.

Taken from the recent original score/album release, this is the album version of the finale. A track of two halves, though the final half doesn’t seem to be as energetic as the Varese re-recording that I have become used to over the years.

The efforts of Tribute Film Classics to re-record Herrmann’s music is to be applauded. This is a score I appreciate more after I heard this version. And it’s a cue that showcases Herrmann’s quieter, more romantic side.

This is a score that would benefit from a faithful re-recording. The finale is full of low register strings to begin with, but brightens up somewhat towards the end of the cue. Herrmann’s early romantic material is the period I am least keen on but with the dark aspect to this score it’s ideal Herrmann fodder to give a nicely light-and-dark score.

Great cue from a great score. This is a recent version of the original score I found on iTunes and it shows off the raw, energetic playing of the original. I think that the less-than-stellar sound recording adds to the whole feel of the score.

A bit more bombast on this cue from the 1954 epic – and some grand choral music too! A great recent release (again) of this score.

Delicious music to mess with the mind! I like how the habanera is used here and how it links with the visuals. This is the original score version so, again, there’s a slight rawness to the music that adds an edge to it. I have always liked how the low strings immediately after the nightmare and before the sun rising gives a musical impression of Scotty dragging himself up from the depths of his disturbed sleep.